Battery: If you’re heavy phone users like we are, then it’s really all about the battery. That’s why we usually start by looking at the battery. The best phone in the world with a bad battery just won’t last very long, which is why we really strive to make sure that we’re using a phone that isn’t going to let us down. You’ll get 6 hours of talk time and about 5-6 days of standby time. Naturally, those are just estimates and if you end up using certain services on the phone heavily (we’re looking at you, Bluetooth and Wi-Fi), you’re going to see those numbers get cut down quite a bit.

We love the idea of 2GB of ROM and 512MB of RAM, but we’re not really all that happy about 800 MHz processor speed. It kind of feels like a weird compromise on an otherwise great phone, you know?

Still, they do give you a free 2GB card that comes with the phone, and you can always upgrade to 32GB if you really needed to. Then again, we don’t know too many people that have maxed out a 32GB card. Yet the presence of so much capacity shows HTC’s ability to think about the future. Even though people love moving from one phone to the next, there are some of us phone freaks that want to keep a phone for a few good year sand even pass it down to someone else. This means that you’re going to need more capacity — remember when phones only went up to say, 2GB? That feels like a long time ago compared to know, and it’s amazing to really see how far we’ve come in the world of mobile technology. 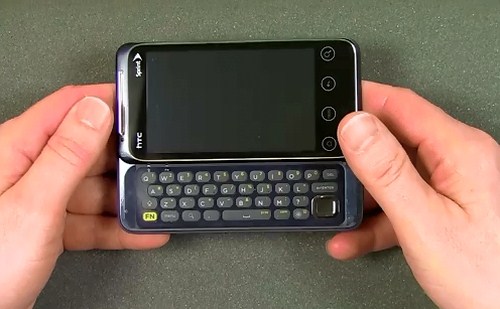 Please — if you want to get that big 32GB card, you shouldn’t let us stop you from doing that. Jump right in and get the card, you won’t regret it. Also, it gives you m ore space to store apps, which is a good thing too.

When this phone was still being heavily promoted by Sprint, the screen definitely got a lot of attention. It’s a touchscreen phone, which means that duh, the screen is going to be a huge factor in everything. You’re going to want to have a nice screen if you’re going to have to look at it all the time. We were really glad that the HTC Evo Shift 4G really doesn’t disappoint here. Yes, it’s a 3.6 inch screen, 480×800 dimensions. The colors are nice and bright, and we really did realize we were looking at Gorilla Glass.

The phone slides open for a full keyboard, which is something that we really like. Yes, we love touchscreens and virtual keyboards aren’t so bad, but sometimes we need something that we can actually hold onto. That’s where the magic is, people. This phone’s keys are easy to hit, and that makes texting a lot more fun all the way around.

Some would argue that HTC really dropped the ball on the camera, but we would like to respectfully disagree. You see, having a 5MP camera isn’t a bad thing on a phone. You’re never going to get a phone with an amazing, make-the-angels-sing-and-dance camera. It’s a phone, not a professional camera. If you want to unleash your inner Ansel Adams, you’re going to need to get a good professional camera and stop expecting your poor Evo Shift 4G to fill in the gap. It’s a great phone, even an incredible phone, but it’s not going to be everything to everyone.

Still — the camera on this phone is pretty nice. Anyone that doesn’t think so only needs to remember one term: Sidekick. That’s all we’re going to say on that.

There’s a lot to love in this phone. You’re going to have a full out Android phone that is easy to upgrade — we can upgrade to 2.3 with no problems, and we can also take full advantage of the Android Marketplace to make our phone even more amazing. Even if you didn’t want to add any apps to this phone, this is a phone you’ll probably keep for a long time.

Get this phone — you really won’t regret it. And that’s a statement we don’t get to make often!