The HTC Desire is one of the latest generation of smartphones. It was released in spring 2010 and it is powered by the Android operating system.

What sets the Android operating system apart from such operating systems as Symbian is that it was designed from the start with browsing the internet in mind, whist with Symbian browsing was something added to the original operating system. Not surprisingly then, phones using the Android system provide their users with a much better browsing experience and in performance they are the match of the iPhone.

The design of the Desire was based on a previous Android phone Nexus One, a phone that was manufactured by HTC but marketed by Google. With the desire, branding is entirely HTC and the connection with Google is downplayed. As in the Nexus One, the Desire uses the famous Snapdragon microprocessor which employs 1 GHz ARM technology though the display, which is 3.7 inches, is now manufactured by Sony which many claim to be an improvement. It is touch sensitive with pinch zoom functionality and has a resolution of 480 by 800. 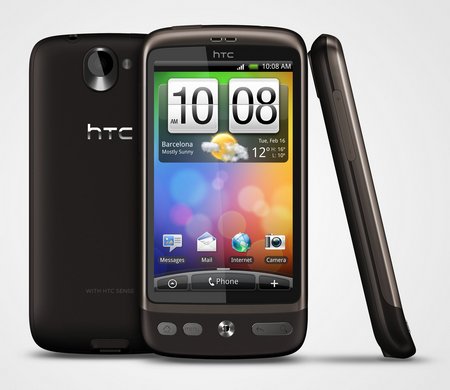 Android allows you to create up to seven home screens and all can be viewed simultaneously. The software is also packed with features which includes HTC sense which has applications such as automatic weather and clock adjustment which senses location and time zone; a ringer that is silenced just by turning over the phone; graphic features such as text reflow with automatic size and position optimisation; and a universal search feature which searches everything on your phone and the web.

The built-in camera has a five megapixel sensor with autofocus and flash. Whilst far from being the best phone camera on the market (the 12 megapixel camera found on the Nokia N8 takes some beating) it is adequate for most purposes. It includes such features as face detection and geo-tagging.

Arguably the Android operating system provides the best experience in satellite navigation including Google Maps Navigation and Street View. Download speeds are up to 7.2 Mbps on 3G or 560 Kbps on EDGE.

These are just some of the features offered by one of the most desirable smartphones on the market, the HTC Desire. To find out more about it, then check out Phones4u.co.uk today.