So, the new tech battle is a matter of getting specific with cell phone: does the Samsung Galaxy S really beat the iPhone in terms of picture quality? Well, there’s an easy way to find out if that’s really the case.

First, a little bit of background. The Apple iPhone 4 is the newest generation in the iPhone series. It brings a lot of features to the table, such as a larger screen and plenty of on-board memory to be had. There’s plenty of space on the phone to hold pictures, music, and video, which are must haves for anyone that’s on the go.

In the other corner we have the Samsung Galaxy S, which is also a great phone with a long list of features. Samsung has been quick to get on the Android bandwagon, because it’s become quite profitable to do so. Consumers are looking for phones that allow them to do more than use the phone as an expensive paperweight, so that means that Samsung has to step up to the plate and really make sure that they have a winning combination.

The Galaxy S has a very nice Super AMOLED display as well as a 1 GHz processor. The phone design does make it look very iPhone-ish, but it’s all about the technical specs. 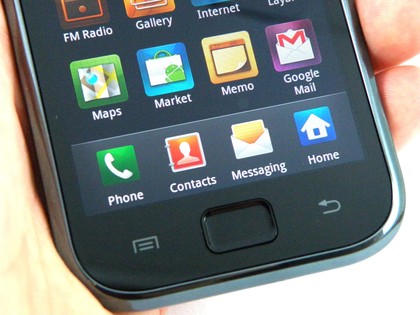 There are plenty — a 4 inch screen, at 800×480 resolution. According to in the wild reviews, users report that the colors are very, very rich and happily saturated. The brightness is also stellar, which is something that people demand out of a phone these days.

However, does this line up with beating the iPhone 4 at a game that Apple knows it has to win in order to stay on top?

The answer might actually be in Apple’s favor, looking at the iPhone 4. The screen is 3.5 inches, which is smaller than the Galaxy S, but it has a bigger resolution at 960×640. The colors are definitely vibrant, which could definitely give the Galaxy a run for its money.

However, who really wins? The iPhone 4 is on its own development cycle, which means that the Galaxy S could pick up new features to use with that extra half-inch larger screen space. If screen size is more important to you than anything else, you may still want to go with the Galaxy S. However, if you’re thinking about sticking with Apple on the iPhone, it’s not necessary a bad choice. As always, it’s up to you to decide for yourself what device will be the best for your needs.