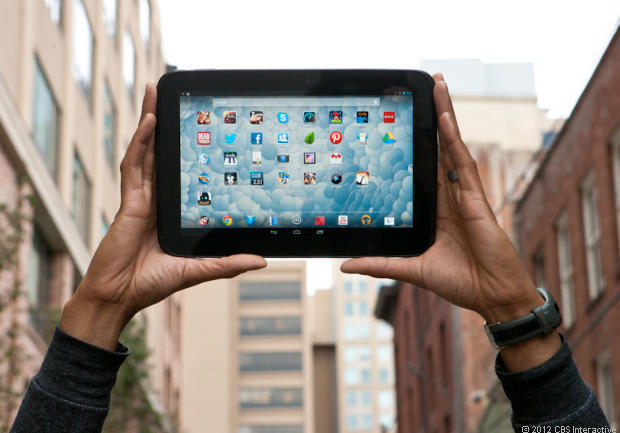 You have two cameras on this tablet, but that isn’t really news. You’ll use the front facing camera quite often for self portrait taking, but you will otherwise just enjoy being able to get a good camera snap on the go. Camera technology is not the star of the show on this tablet, so you will find that you really are better off not getting too comfy with the camera. The quality isn’t that great, even at 5MP. Still, it will take pictures, and they’ll be modest ones.

Video recording is also modest at best, but that is almost a given. This isn’t the focus of the tablet, and it’s better not to get too invested in camera or video.

You’ll get Android 4.2 with the Nexus 10, which is still Jelly Bean. Some new hacks and additions that are definitely worth checking out. Android really just gets better and better from here.

The keyboard rocks — you can swipe your way from one letter to the next to spell out words quickly. If you’re used to Swype, you’ll still want to stick to that. Sorry, physical keyboard fans — it’s all touchscreen on this beauty.

So, how does the Nexus 10 compare to other tablets? It’s a sub-$400 tablet that should get plenty of attention. Yet the trouble here is that there’s stiff competition here. You have the Galaxy Tab 2 10.1, which is $349 for 16GB except that the G-Tab lets you expand that with microSD cards.

The newest iPad also gives this a run for the money, but it’s a bit more expensive.

Right now, you need to look at what you’re going to use a tablet for. If you’re in the market for a tablet anyway, then you wouldn’t go wrong getting a Nexus 10. On the other hand, if you’re on the fence and you’re just not sure, then you really are better off making sure that you check out competition before really going with this.

For students, we thought this would be a great tablet. It’s a little spend, but if you’re looking for a “just because” gift for a student that’s really giving their all; this isn’t a bad one at all. Good luck!