A year after the release of the first phone in the series, the Samsung Galaxy S, Samsung are yet again expanding the brand with a new Android smart phone release.

Hot on the heels of last year’s Samsung Galaxy Tab and weeks after the brand new Samsung Galaxy S II was revealed to the world, the Korean mobile giant have released their plans for a new, more business orientated phone in an attempt to make even more in roads into a market in which they are already having huge successes.

The Samsung Galaxy Pro is the latest phone off the Samsung production line (and the latest in the long line mobile phones to use the “pro” suffix) and it looks like it could be a treat for both business users and more general consumers. 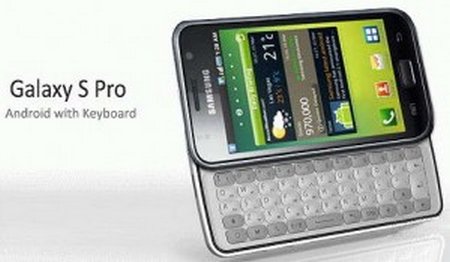 The phone looks not unlike a Blackberry, with its QWERTY style keyboard underneath a smaller screen which is rather attractive in its own simple way and the mesh effect on its metallic back panel is pleasing on the eye.

The keyboard is a welcome addition as it makes sending e-mails and long messages so much easier than even the very best virtual keyboards. It is situated underneath the phone’s 2.8″ 320 x 240 pixel touchscreen display and in other hardware news the phone features a 3 megapixel camera on the back that will take a decent snap but will never set the world alight.

The processor is just 800mhz which is not a lot nowadays, but is more than enough to run this little phone as it’s best features do not require a particularly powerful processor.

If you are looking for a phone mainly to watch videos and play games on this may not be for you but if you want a phone that is great for messaging and has some great business features and you are ready to join the Android revolution, the Samsung Galaxy Pro is definitely worth a look at. phones4u is the home of cheap contract phones and great pay as you go deals, visit the site today to find out the best deal for you