Google Chrome to Phone is a must have Android app from Google for anyone who uses Chrome as their regular browser on their computer. The app works in conjunction with the Chrome extension to send links straight to your phone. It will also work with a Firefox extension called Send to Phone, but as of now, users of other browsers are out of luck.

The features offered by this app make it very convenient to have. Specific links sent from the computer will even open up in their appropriate apps on your Android device. For instance, a links from Google Maps will open up in the Google Maps app, YouTube links will open up in the YouTube app (whether or not the video will actually play is a different story, because some videos have been marked as not playable on mobile devices). You can even copy a phone number off a website and send it straight to the dialer. Other useful features include copying text in your browser and sending it to your Android device’s clipboard, and of course the main feature, opening up full web pages on your device’s browser straight from your computer’s browser. 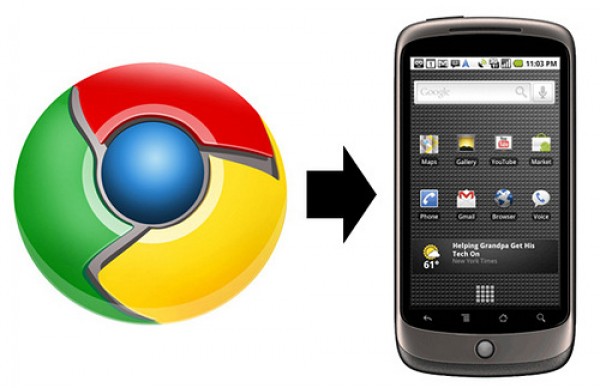 As mentioned before, Chrome and Firefox are the only two browsers supported by this free Android app right now, but look for more to jump on the bandwagon in the future. With all of the major browsers now supporting some type of extension system, it’s only a matter of time before users create extensions to communicate with this app so that they can use their favorite browser with it. Also, if you aren’t at least running Android 2.2 yet, you’re out of luck along with the non-Chrome and non-Firefox users, as it requires FroYo or a later version of the Android Operating System.

If you have Chrome or Firefox, Chrome to Phone from Google is a must have. Whether it’s full web pages, parts of them, phone numbers, videos, or maps, Chrome to Phone has you covered in an easy to use fashion. One simple log in to your Gmail account is all it takes for the sharing to begin.